Private recordings as evidence in the Family Court

It is important to be aware that in Western Australia it is an offence to record a private conversation without the consent of each party to the conversation. However, it also remains true that the Family Court will sometimes allow private recordings into court as admissible evidence. In addressing this issue, I refer to the following cases. 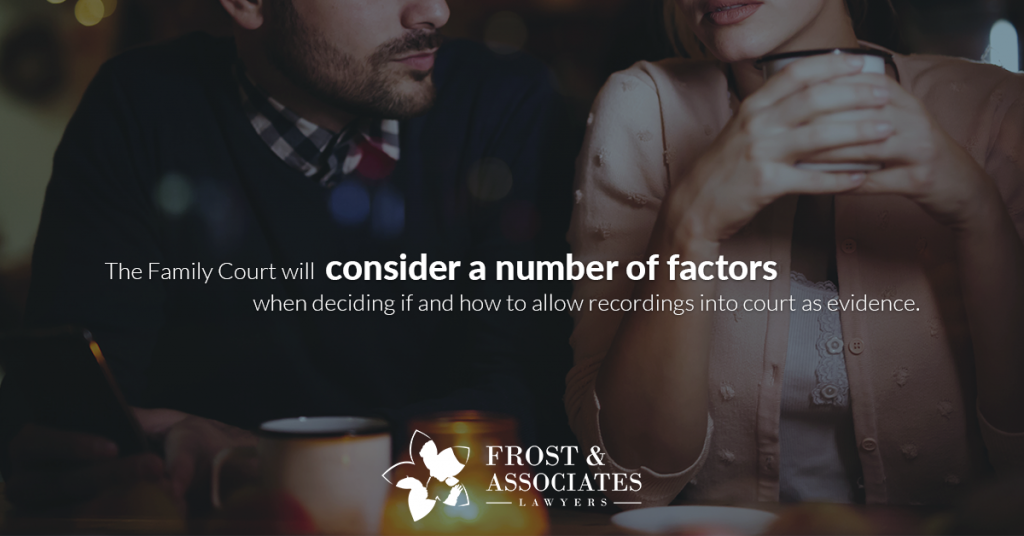 The Family Court will consider a number of factors when deciding if and how to allow recordings into court as evidence. In the matter of Jasper & Corrigan (No.2) [2017] FCCA 1467 (23 June 2017), the parties agreed that the wife in this matter had made a recording of her husband’s conversation without his knowledge or consent.

As this matter was heard in NSW, Judge Altobelli considered the NSW legislation in relation to the issue of illegal recordings. In this case, the judge found that the recordings were “reasonably necessary” because the wife had no other options available to her. As such, he considered that the court would: “exercise its discretion in allowing the evidence to be led”. The judge went onto clarify that: “What needs to be made very clear to all parties in this case, and perhaps especially to the Applicant, is this: all the court is ruling on is admissibility of evidence. It is not ruling on the weight that will be given to evidence. Evidence might be admissible, but it might not receive much weight.”

This means that even if a recording makes its way in to court, the court may still disregard it, or interpret it in a way which had not been intended. For example, a court may well decide that one party had been “set up” by the other in order to create an incorrect impression of what had occurred.

Recordings – are people being “set up”?

In the judge’s view, the husband had “goaded” the wife and had set up traps where he would present himself as a victim and his wife is the aggressor. In commenting on this behaviour, he said: “It was theatrical and manipulative behaviour. The parties had been in a relationship for many years and I am satisfied that the husband knew what ‘buttons to push’ to upset or aggravate the wife.”

If you have been the victim of family violence and have made recordings of violence being committed against you, the court will consider your difficult circumstances.

Family violence is defined by section 4AB of the Family Law Act as “violent, threatening or other behaviour by a person that coerces or controls a member of the person’s family (the family member), or causes the family member to be fearful.” In the matter of Garner & Garner [2016] FamCA 630 (5 August 2016), Judge Berman stated that the recordings were evidence of family violence. The recordings included the husband swearing at the wife, calling her names and threatening suicide. While these recordings were made by the wife without the husband’s knowledge or consent, it was given to the court with the consent of both parties. Judge Berman stated that: “There is no doubt that the father’s language as recorded in the transcripts would satisfy the definition of family violence”.

In these circumstances, recordings or even transcriptions of recordings given with the consent of both parties are more likely to be admitted by the court, especially in light of how difficult it usually is in obtaining evidence of family violence.

So, what should I do?

It is important that you don’t create evidence that you think makes your family law case “look good”. Judges are highly educated and skilled at scrutinising evidence. It is likely that if you have padded your evidence, lead your ex-partner on, or attempted to paint yourself in a favourable light, the court will see right through it.

Also, as stated above, it is illegal to record someone without their consent. Doing so may have criminal implications. If you believe that any incidents took place in a public place with CCTV, speak with your lawyer about obtaining this evidence.

It is important that if you have a recording or believe that you have been recorded, that you bring this to the attention of your lawyer so that this evidence can be dealt with in the most appropriate manner. Recordings remain a difficult area for both parties and Courts to deal with.

As with all areas of Family Law, each matter is unique to those involved and everyone’s circumstances will be different.

5 Simple Benefits to Having a Family Lawyer

When Can You Apply for a Restraining Order in Western Australia?